This should wrap things up on my sketch-sculpt.

After I finished the initial sanding passed, I added a couple coats of grey primer. I wet-sanded between each coat of primer, and then I gave her a final polishing with a scrap piece of cotton cloth. 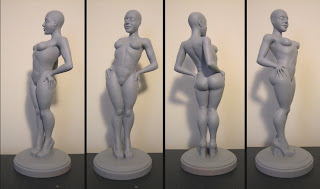 It was great to see my sculpture reach this point, and it was particularly cool that it was so solid and durable after the baking. It's held up to all the handling and sanding without cracking or breaking, which is great because I've got one last thing to add: her hair. 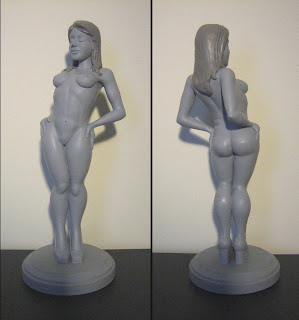 And now she's finished. (Well, at least for now she is.)

It feels really great to have taken this sculpture this far. I learned a lot as I worked my way through the entire process. If I were to critique my own piece, I would not find it without fault. I see a lot that could be improved in both her pose and in her anatomy . Maybe someday, I'll address these issues. I've actually contemplated making a mold, casting her in wax, and making revisions to her in that form, but for now... I'm calling this one done!

So, before I keep going on about the process, let me give you some specifics about the materials involved. My armature, as I mentioned in previous posts, is mostly fashioned out of a coat-hanger and a thinner gauge aluminum wire. Besides that, I didn't use any internal fillers (like foil) to build out the thicker areas of the clay. I'm not a fan of fillers.

As for the clay itself, I used a polymer clay called Super Sculpey. It's a very soft material, and it takes a little bit of getting used to, but, once you do, it's really great stuff. On the plus side, it isn't oily (well, not much anyways), it takes great detail, and it is widely used by many professional sculptors and effects artists. But possibly the best things about Super Sculpey is that, after you're through sculpting with it, you can bake it in an oven to make it hard. Once the Super Sculpey is hard, you can sand it smooth and paint it.

Now, maybe I was a little impatient, but I really felt like I was at the point where I could call my sketch-sculpt done. I had added the last of the details except for hair, but I was planning on sculpting her hair after she was baked so I could sculpt over a hard surface.

And so, just like that, the major sculpting had ended. I knew that she wasn't exactly smoothed-out yet, but I also knew that a lot of that could be fixed with sand paper after she was done baking.

That being the case, I decided that I was ready to pop her into the oven, and so I did. 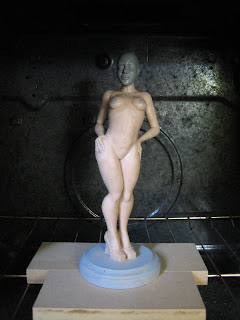 There's something you should know about baking Super Sculpey. If you don't bake it properly, it will crack. To prevent this, I first ignored the directions written on the box that the Super Sculpey comes in, and instead I used baking instructions that were posted on the net by a very talented professional sculptor named William Paquet. Here's the link to the baking instructions that he posted.

I followed his method and it worked great! My sculpt was evenly baked, and there was no cracking! Here are some pics of the sculpt — post bake... 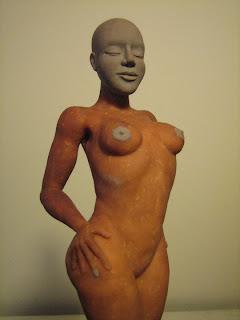 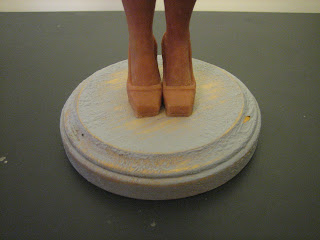 You'll note that the baking darkens the original color of the Super Sculpey, but don't worry, that's a good sign. The darker color lets you know that it's been cured and has hardened.

Now that the sculpt was hard and durable, I was really able to feel all the bumps and rough spots on the surface. And so, I started to smooth out these bumps and roughness by giving her a few passes with some fine grit sand paper. As I worked my way through and onto the 2nd and 3rd sanding passes, I switched over to wet-sanding.

Here she is after the initial sand paper sessions... 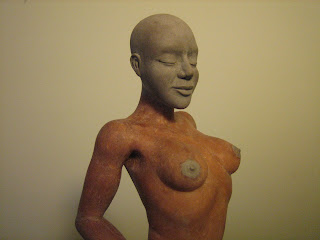 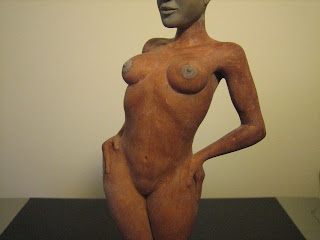 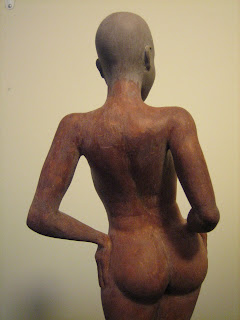 I also sanded the wooden base that she's standing on. It was covered in primer, but the paint bubbled up during the baking. 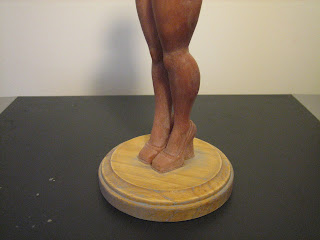 The sand paper worked great, and now she was definitely a lot smoother.

So all in all, including the prep-work for the baking, the baking itself, and then the sanding afterwards, I had a busy couple of days, but they were well worth it! 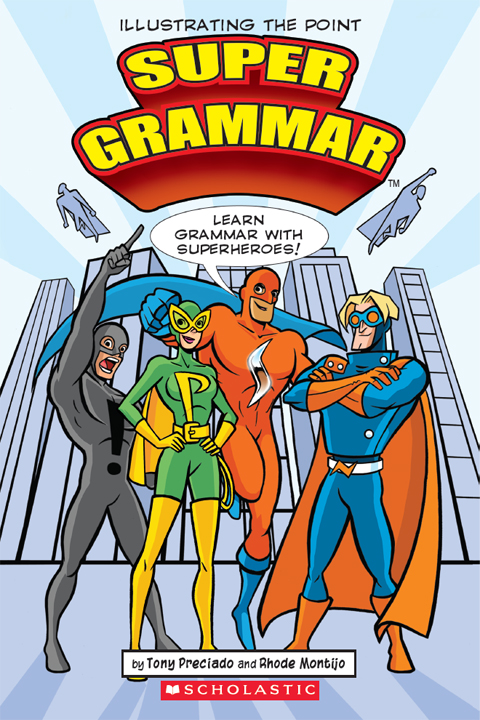